Upon deportation back to Uganda, weight lifter Julius Ssekitoleko was interogated for close to two hours at Entebbe International Airport before he was whisked off to a yet to be identified place, leaving the family members in tears

The arrival lounge at the Lakeside Entebbe International Airport is normally accompanied by euphoria, particularly so for the returnees and those waiting to receive their dear ones from their respective destinations.

On the contrary, it has been tears, plight and total agony as 20-year-old Ugandan weightlifter Julius Ssekitoleko was forcefully returned after a failed run-away expedition in Japan where he had gone to participate in the 2020 Olympics.

Power to the People: Kisoro Residents Win Round One in the fight to Save Kisoro Mayors’ Gardens

Anger and Outrage from Conservationists as Mayor’s Gardens to be turned into Modern Market.

Family members, officials from the ministry of education and sports, internal affairs as well as the keen “paparazzi” patiently waited for the deportation of the young sportsman.

Aboard Qatar Airways, QR 8313, the flight was right on the scheduled touchdown time of 8:30 am. 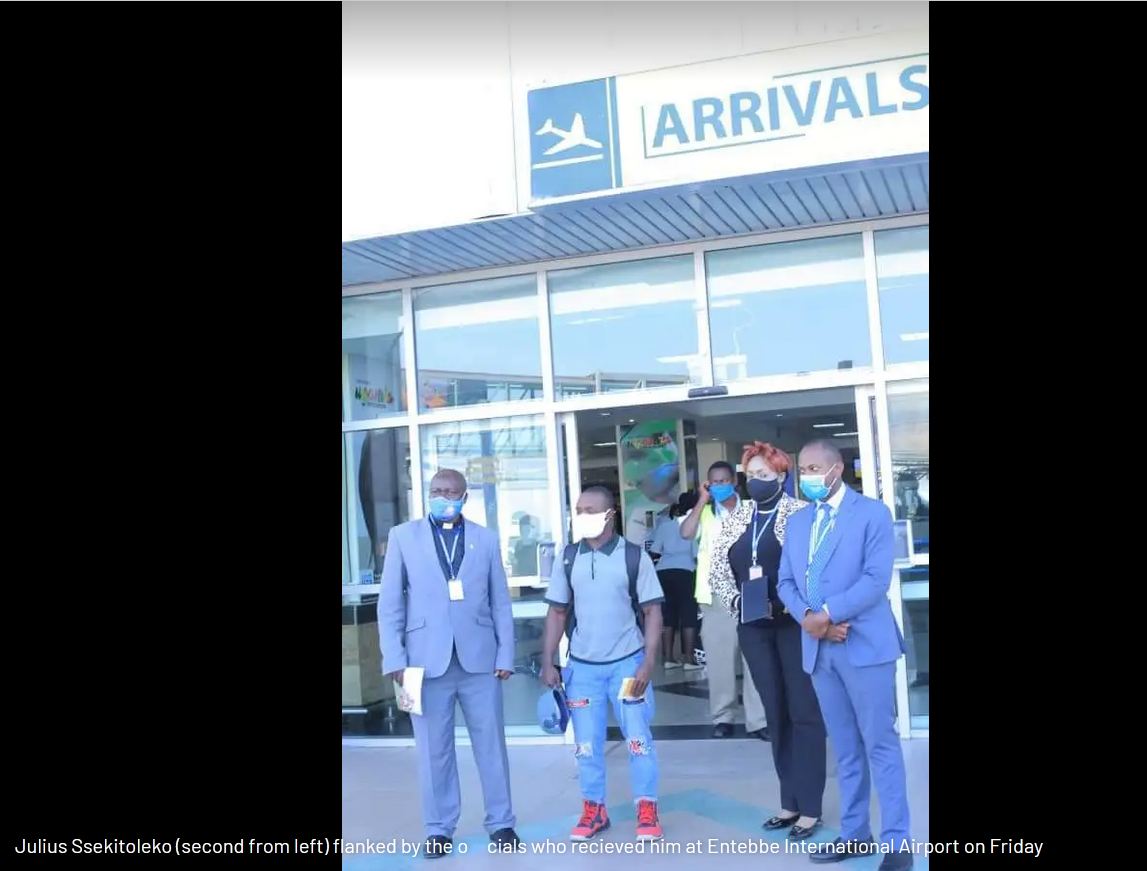 The well-bodied Ssekitoleko had his mouth and nose masked, of course a new normal prerequisite to mitigate the spread of the highly contagious Coronavirus.

He was donned in a greenish cap, grey polo T-shirt, and damaged jeans with red boots.

Ssekitoleko carried a small backpack and looked visibly healthy though stressed as he was accompanied by an official from Japan.

His mother Juliet Nalwadda, spouse Desire Nampeewo and aunt Pauline Nakasagga all shed tears moments after the arrival of Ssekitoleko.

Ssekitoleko was then handed over to the Entebbe International Airport security where he was interrogated for close to two hours before he was whisked off to an unknown destination.

“My son left with the hope of winning an Olympic medal. Since 12 years, he has also been into sports as he first played rugby before switching to weightlifting. We appeal to Government to forgive him for any wrongdoing and also assist us since the wife is due to give birth and they were recently sent away from the family house because of accumulated rent arrears,” a teary Nalwadda disclosed.

Rev Canon Mugumya assured the family of Ssekitoleko about his safety and well-being.

“We are happy that Julius Ssekitoleko returned home in a good healthy condition. We shall work out logistics and carry on the counseling so that he is rehabilitated well. There is hope for his fast recovery to resume sports activities,” Rev. Canon Mugumya stated.

After two hours of grilling and interrogation at Entebbe international Airport, he was driven to a yet-to-be-established place to record further statements with Interpol.

Ssekitoleko vanished from the Hotel room in Osaka having learnt that he was due to travel back home before the Olympics Games kicked off since he had failed to hit the qualification mark.

Voice of Muhabura's newsroom comprises of well trained journalists with eyes on the general "NEWS" spectrum. The department has freelancers and affiliates zealous to serve you better.

Power to the People: Kisoro Residents Win Round One in the fight to Save Kisoro Mayors’ Gardens

Anger and Outrage from Conservationists as Mayor’s Gardens to be turned into Modern Market.